Our point of entry, located underneath the I-90 bridge.

Yesterday, Matt and I went out with a group from the Marker Buoy Dive Club to explore an area most Puget Sound divers don’t usually bother visiting: the area underneath the I-90 bridge over Lake Washington. We haven’t been diving in freshwater since leaving Michigan two years ago, so it was nice to get back into the weeds and encounter some lentic ichthyofauna that we hadn’t seen in a while. I also enjoyed taking out 5 extra pounds of lead and giving all of my gear a good rinse!

The main attraction on this dive is the remains of the old Lacey V. Murrow floating bridge, which sank during a storm in 1990, taking a bunch of trucks and construction equipment with it. Many of the objects that went down have been salvaged, but the bridge is still down there, with large sections still mostly intact.

Our group entered the water underneath the new bridge, swam about 50 yards out, and then descended to about 40 feet. The visibility was surprisingly good, but as soon as we got past 30 feet, we were enshrouded in near complete darkness. It did not take long to locate the remains of the old bridge. It rested at 60 to 70 feet, and was largely intact, with very little was growing on it. Fortunately, it seems that invasive zebra and quagga mussels have yet to colonize Lake Washington. Aside from the bridge and a few piles of assorted junk/Rainier beer cans, there was not a great deal of large debris down there. The substrate was silty and barren, and it felt like we were exploring the surface of some alien planet.

We did manage to catch glimpses of a few creatures down there, however. There were several crappie hanging around the bridge railings, and we encountered a shoal of small yellow perch at about 80 feet. A few large crayfish had made their homes in some of the pipes, and I caught sight of a tiny sculpin trying to hide itself in the silt. 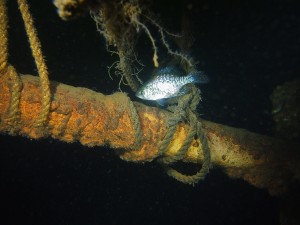 A black crappie (Pomoxis nigromaculatus) hanging around part of the sunken bridge.

Overall, I think that this dive is severely underrated. Several divers I have talked to have claimed that once you’ve seen it, there’s no need to visit this site again, but I disagree. There is a lot of history to this site, and probably many cool sunken treasures to be found in the muck. This was an awesome experience for me, but perhaps I’m just a Michigan diver at heart.