Nearly eight months after relocating to Seattle, we decided to return to Ann Arbor for Matt’s Ph.D. hooding ceremony. It felt a bit strange to back in the Detroit area after all this time, especially because I have gotten used to massive traffic problems, a dearth of places to park, and very few open spaces. I was saddened to note that a number of local small businesses had disappeared as well, including my favorite yarn shop. The difficult economic situation that has been facing southeastern Michigan for years has become particularly evident. I am not certain if this is a result of my spending a significant amount of time in a more prosperous part of the country, or if things are actually getting worse for my hometown.

Matt’s graduation marked the official end of the many years of graduate school spent at the University of Michigan. Because he did not defend until later in the spring of last year, he had to wait almost another year to participate in the hooding ceremony. We seriously debated whether or not it would be worth it to fly all the way back to do this, but Matt ultimately decided that he would regret it later if he didn’t attend. I had mixed feelings as I watched him walk across the stage; I was obviously happy for him and proud of his accomplishment, but also sad to see this chapter of our lives come to a close.

We spent the remainder of our time in Michigan up at my family’s property in Manistee. It is located along the shoreline of Lake Michigan, and there are some amazing views to be had atop the bluff. 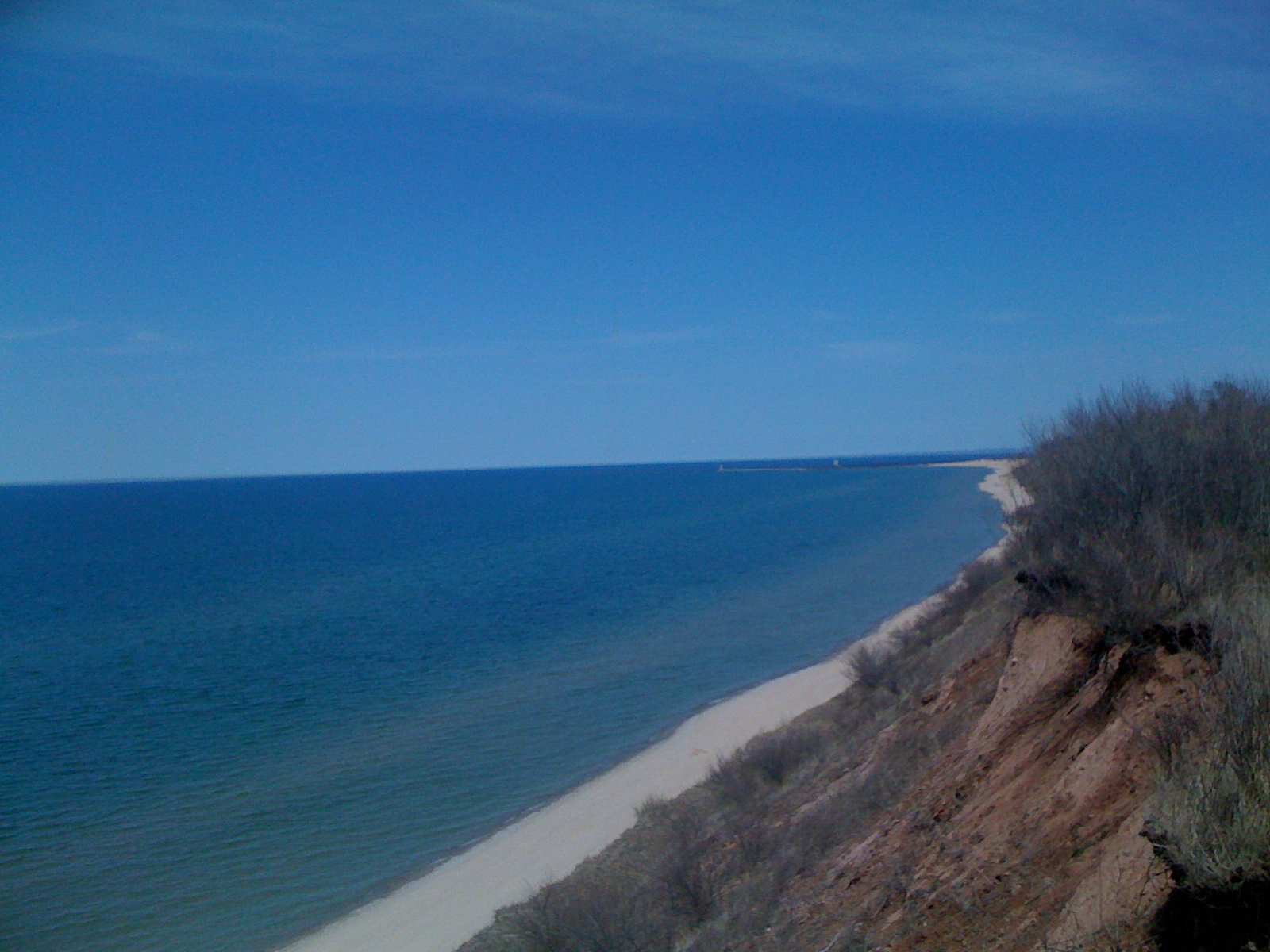 The birding is excellent up here this time of year. I was able to observe several new species on the property, including indigo buntings, chipping sparrows, white-throated sparrows, and rose-breasted grosbeaks. Large groups of black-capped chickadees and yellow-rumped warblers congregated in the wooded areas along the driveway. A lone green heron was repeatedly spotted feasting on the abundant amphibians in the pond. The spring peepers were out in full force, drowning out all other sounds at dusk and well into the evening. Despite this, I was able to detect a few gray tree frog calls here and there. There were numerous birds out on the big lake, including a large flock of common mergansers. 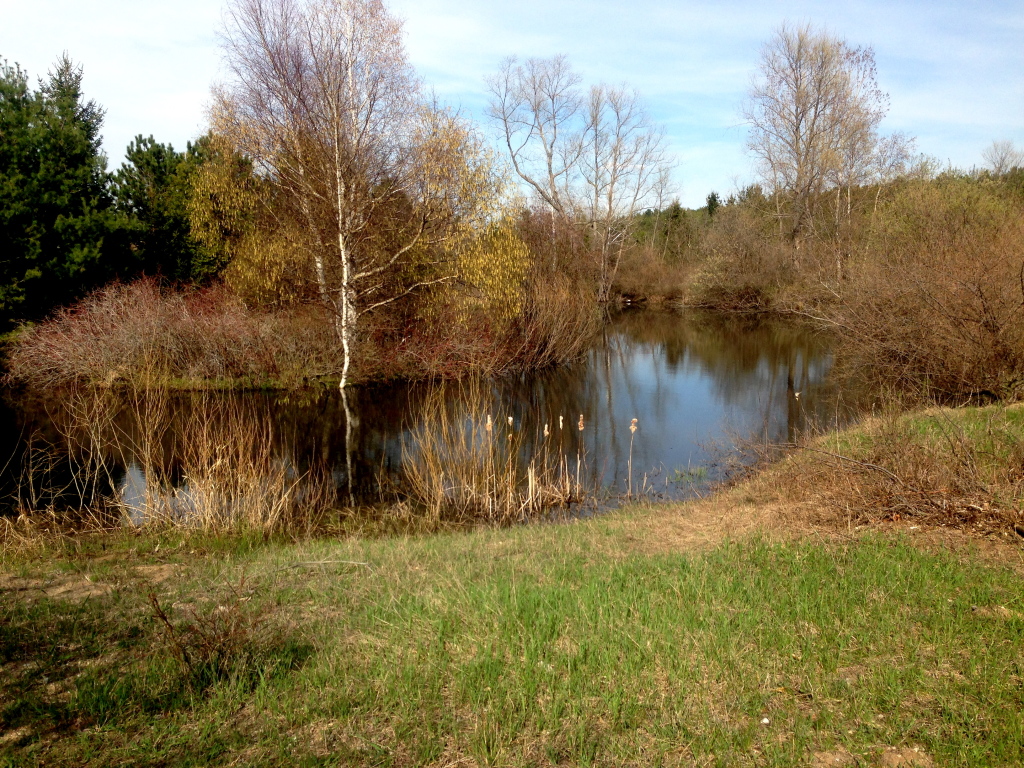 The ponds harbor a wide variety of living things.

My mother also drove us by a local business that has constructed a nesting colony for purple martins along the shore of Manistee Lake. They had mounted several hollow plastic gourdes on a pole, and the birds seem to love the arrangement. They swoop and dive for insects out on the lake, and return to their nests repeatedly during the day. I was unable to determine whether or not there were any chicks present.

My mother spent a great deal of time attending to her beehives on the property. Apparently, there had been a sharp increase in the number of cases of colony collapse syndrome reported in northern Michigan over the winter. However, she has escaped relatively unscathed, and has lost only two of her twelve hives – many other local beekeepers lost everything. Due to her success, she is tossing around the idea of expanding her business and acquiring more hives. I think she should go for it, as everyone seems to enjoy her honey, and her hobby is now paying for itself. 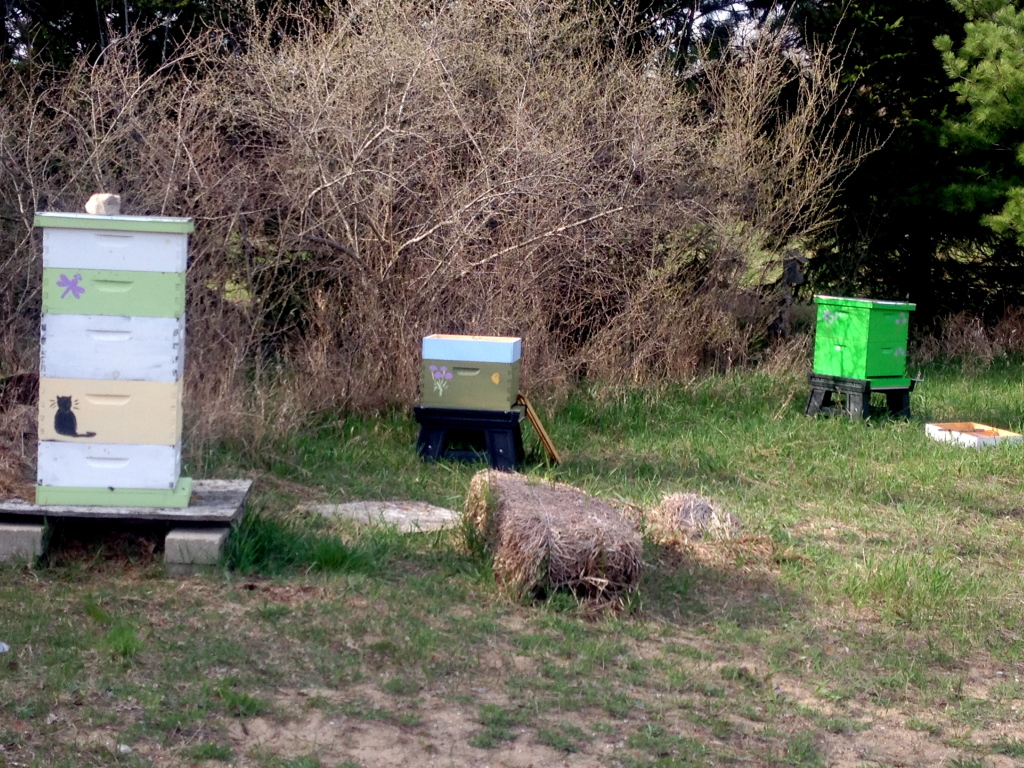 Three of the numerous hives located on the Manistee property.

The bees return to their hive after foraging.

Mom checks on one of her hives.